unDer the islaNds are stArs

Several months have passed and my erratic 'working', sound-making life has continued its tributaries in many directions...

a performance at The Wine Cellar in Auckland; 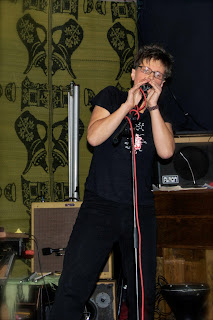 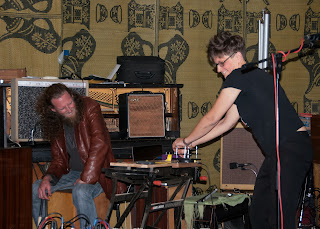 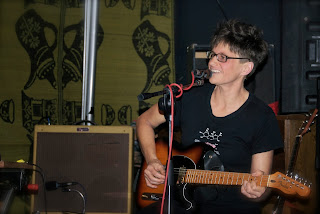 an installation at The Wellington Railway Station in collaboration with Erica and Struan from Tape-Art New Zealand where we created a visual/aural fantasy-world labyrinth for people to walk through; 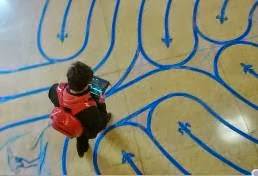 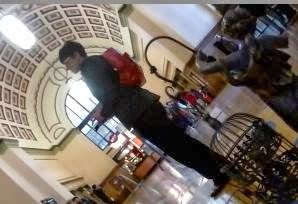 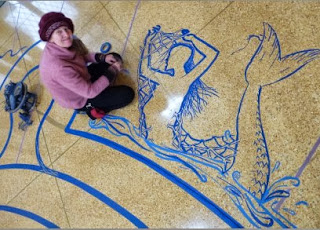 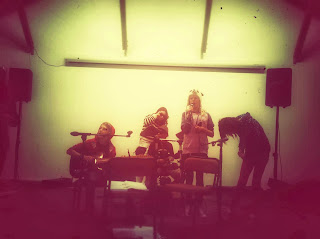 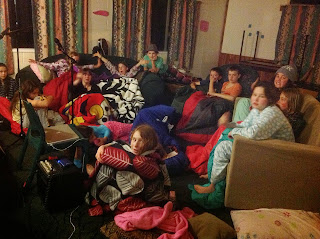 So I get to now and am dragging my head back into the Muriel project...only I know from experience that no such effort is required. Yes, it seems that way...how does one reconnect with the writings of someone who was writing 70 years ago on the other side of the world?

Well...to quote Muriel herself - "O for God's sake / they are connected / underneath..."

It is a good day when one realises that all of the activities of the day/year...all sights seen...all sounds heard....conversations had...they are all informing of what is to come next.

So my next 'task' was to compose a third song for the play 'Throat of These Hours' by Marian Evans - a play and now radio-play about two women who work in a radio station, and which centers on the works and life of Muriel Rukeyser .

I don't know if it is a lazy position to take, but when I am at a loss as to what to do next, I inevitably come back to those things that have happened, been observed/experienced...those things which have stood out in my mind and activated that sense of rush in the gut...

I felt stuck coming into this third song - am I anticipating my style based on what I have done? Am I anticipating the effects of Muriel's writing on me? Do I really know what I am doing? (the answer to this most definitely seemed to be 'No').

First approach - well....read the poem. That's easy to say. But. Reading a poem takes quite a bit of skill. I can tell you that with a certain amount of confidence now that I have a poet as my love interest. I am very fortunate in that Hinemoana is not only a fantastic writer of poems - she is also a musician and vocalist with an astute 'ear' for sound and composition. She has told people many times that she vicariously studied sound art at the same time I did, but I can tell you she already had a love and understanding of sound in her bones.

This is very handy for me :) because she understands the world of sound, and the world of words - and can do a little cross-translating for me when required. It has also meant that over the years I have been to a great many more poetry readings than I would have, and slowly but surely, am expanding the poetry-listening muscle...and it is indeed a muscle...it takes a certain fortitude to immerse oneself in a world that can be so intricate, dense, and at times mysterious - and one needs to bring all of oneself because...then it is gone. Every word has been chosen specifically to maximise effect and meaning, often with conservation of word use at the core.

I also love that Hinemoana has largely delved into and written poetry that has sound at its core - a place where meaning and narrative are secondary to the sounds of words. This approach is a good companion to the world of sound composition because it requires the listener/reader to bring more of themselves to a piece instead of having it do all the work for them.

So in coming to some of the poems of Muriel Rukeyser, I have at times needed to go through a reverse process. In looking at Islands, it is quite accessible and easy to understand. It seems quite straightforward.

O for God’s sake
they are connected
underneath

Some are cliffs
The Bathers think
islands are separate like them

Connectedness. Tick. Yes. An obvious meaning. What could I bring to this poem? How could I meet with it? I often hold a desire (of which I am not proud) to be an 'original' - to bring something utterly unique to a work - something that will set me apart...and here I am faced with a piece which has connectedness as its theme. Using islands as a metaphor.

Next step - walk the dog. 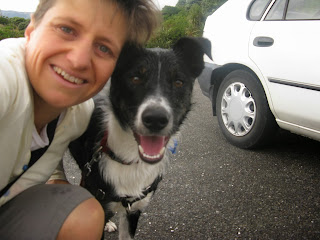 Tai is a border-collie/huntaway (read that as - bundle of energy, slightly crazy, strong-willed eye dog). Hinemoana and I have had him for nearly 2 years and after a particularly hairy first year, life with him is settling into a routine which includes at least one, sometimes two walks a day. We are fortunate in that we live on the Kāpiti Coast (About 40 mins north of Wellington, New Zealand).

One of my favourite walks is along a beach which is connected to a large inland area of parks and walks. It has a stream which runs out to sea, farmland, railway tracks where an old tram takes visitors for rides, and an area whee model plane enthusiasts fly their aircraft. I have been to a wedding in the area that was serenaded by the high pitch whines of planes taking to the skies. The park is called Queen Elizabeth Park. Sometimes Hinemoana and I both take Tai there... 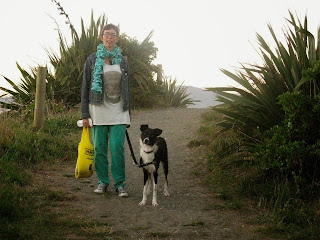 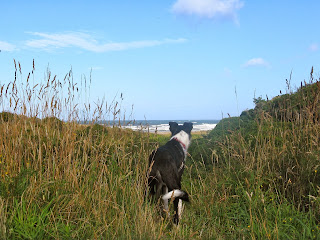 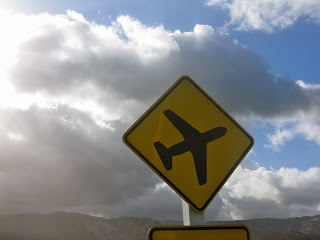 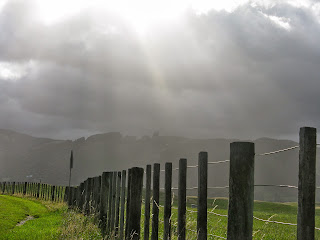 The Kāpiti Coast is magnificent. You can view the coastal hills as they descend towards the sea - separated only by what is known as the Coastal Highway - a thin piece of road that follows the curve of the coastline. On a stormy day, it can be quite exhilarating and a bit scary driving with wild ocean breaking against the barriers. One of the hills looks to me like the face of a man staring upwards to the sky.

One of Tai's favourite activities is chasing tennis balls along the beach. 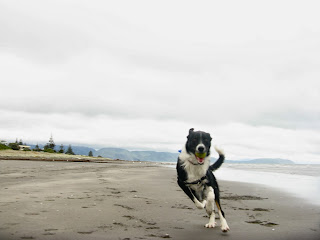 Looking out from the coast, one can see Kāpiti Island - an island that fascinates me both for its physical shape and its history. To me it sits in the water like a crocodile, and, depending on the day, can be stark in its contrast from the surrounding sea/sky, or soft around the edges and misty. Sometimes it all but disappears. 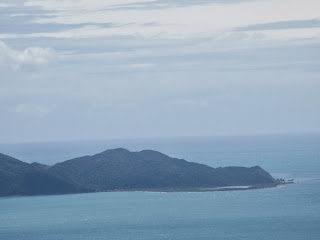 The island is Ngāti Raukawa land, having been inhabited by an infamous Māori chief Te Rauparaha. It is now conservation land and a sanctuary for native birds, with the North End being maintained and occupied by descendants of the local iwi (tribe). 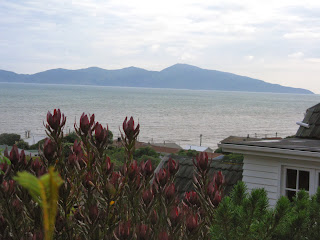 Unless you are high atop Paekākāriki Hill and looking across to the island or in an airplane flying over, you won't notice the three islands in front of Kāpiti. They are hidden from ordinary view, even though the distance from shoreline to the island is only 5kms. The islands were used as camouflage for the local iwi who lived there during war times. 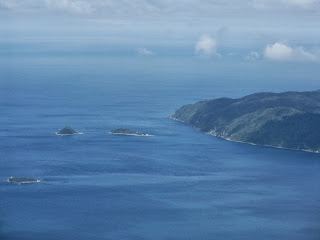 So there I was, walking the beach, wondering how I would connect with Muriel's poem, and translate it to music. The island view helps I'm sure - but not while I am at this stage, embarking on a mental exercise. I guess it will only be later when I am actually with the music and physically engaged in it, that the energy presence of Kāpiti Island will make itself felt. 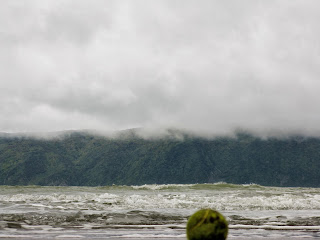 There comes a time when no amount of walking and thinking can actually replace sitting down and turning up to the empty yet-to-be-written-piece.

I knew I just had to sit down and try - imagining the piece wasn't going to write it. I had an imagined first line - in Scott Walker style, like a burst of operatic monologue - OhforGod'ssake!

This was most certainly the first approach I would take for certain, but this over-rehearsed line in my mind disappeared as soon as I started to engage in the music.

There was one other thing that was to inform the process of writing this song and that was a wee movie I went to called Gravity. Amazing film. Soundtrack by Steven Price.


For some reason this film resonated with me in terms of connectedness without being really sure how. I had a feeling of vast. alive. cosmic. isolation. for sure. but also. connected to others. to dreams. to memories. even if only. in 2-bit. morse code. stars. tectonic plates. all nimbus. fingers. reaching.

and so came the sound palette. glitch. broken-up speech. suspension of sound. foreground. background. pulse. a vocal that goes underground. that echoes. that moves. and disappears to the other side. that disappears from view.

i listen back to the very early demo of the piece i have started for Islands on iTunes. When it is finished, iTunes shuffles to the song Isolation by John Lennon - another New Yorker writing 40 years later...


People say we got it made don't they know we're so afraid
we're afraid to be alone, everybody got to have a home...
Isolation

We're afraid of everyone, afraid of the sun
Isolation

Posted by Christine White at 2:15 AM