This will definitely need to be a series when looking at possible musical influences on the Muriel compositional process, but for now I want to focus on what was simultaneously greeting me at the same time as the Muriel project - and that was Scott Walker's album Bish Bosch.

Wow! First - that's all I can say about this album. After hearing a review of it by Nick Bollinger of Radio New Zealand National whilst driving home from teaching, I knew I had to have it.

Let's just say from the outset, that it is not an easy album to enter into - it is a listening challenge for sure, and one that needs to be revisited several times. Don't expect to make any sense out of what the album is saying unless you want to do a heap of research - and even then don't expect to have full grasp of it - maybe its not meant to be graspable.

The sound palette in this album offering is vast, visceral and evocative. This trailer will give you an insight into the tones, textures and variations on the album but it wouldn't be sufficient to just listen to these sound bites alone.

I've never been good at describing music in a critical way - so here is an excerpt from The Guardian (from a rare interview with Scott Walker):

"On the surface, there couldn't have been a more unlikely transformation – imagine Andy Williams reinventing himself as Stockhausen. Yet in a way it was all of a piece. His latest album, Bish Bosch, is only his third in 17 years, all of them elaborate, epic and inaccessible. It is a post-apocalyptic opera of sorts, with blasts of rams' horn, dog barks, scraping swords, machetes. The music nods at Gregorian chant, doffs its cap to Shostakovich, gives a thumbs up to industrial metal, and is uniquely Scott Walker. The lyrics reference sexual disease, brown dwarf stars, court jesters and dictators, all delivered in a strangulated baritone, as if Walker's testicles were being squeezed. At times there's a terrible beauty to his poetry ("Earth's hoary/fontanelle/weeps softly/for a/thumb thrust") while at others there's a bloodthirstiness that could be straight out of Jacobean tragedy ("I've severed my reeking gonads, fed them to your shrunken face"). It's brilliant and bonkers. The opposite of a guilty pleasure: a guilty torture".
http://www.guardian.co.uk/music/2012/nov/23/scott-walker-interview


So apart from the intuitive synchronistic appearance of this in tandem with Muriel, what can I see as linkages that lead me to want to reference my discovery of Walker with my discovery of Muriel.

"Bish Bosch is best enjoyed as an act of intense pop meta-fiction, a work, rather than a set of tunes. Walker's orchestrations are cinematographic; punk and metal incursions swap with melodic passages and austere arrangements. The space between the instruments, and Walker's voice, is often eloquent in itself. He toys with language, references and unconventional instrumentation. Given time and application, his lyrical riddles offer a series of rabbit holes down which to disappear, tongue-tied".
http://www.guardian.co.uk/music/2012/dec/02/scott-walker-bish-bosch-review

of Rukeyser...
"For Rukeyser, formal poetry offered a dynamic means of connecting diverse emotions and ideas through images and sound patterns into an organic unity that resists static closure: a 'gathering-together of elements so that they move together'(LP19); free verse gave her an equally fertile ground for developing connections". (pg 17 - essay by Meg Schoerke - Forever Broken and Made": Muriel Rukeyser's Theory of Form - from the book How Shall We Tell Each Other of the Poet - The Life and Writing of Muriel Rukeyser - edited by Anne Herzog and Janet Kaufman).

of Walker...
"It amuses me that he calls his new material "songs" when they are so unsingable. Doesn't he think of himself as a composer? 'I think of myself as a songwriter, but I agree they are maybe not traditional songs. I know what people mean, but what else can you call them?'"
http://www.guardian.co.uk/music/2012/nov/23/scott-walker-interview 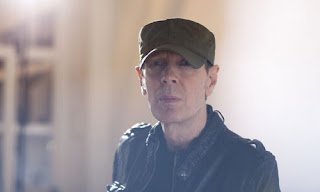 Pitchfork: The weird thing is that I still situate you in pop music.
SW: Well yes, because I'm not so in with the prescriptive avant-garde agenda. I can do that sort of thing, but I feel that I'm still interested enough in song structure. When I look at a lyric on the page, the lyric is alive to me, looking like soldiers in a field. I can move it around, and it's very black-and-white. There is nuance and subtlety in some of the things we've done, but what I'm trying to do is get that very hard, upfront sound, especially on this album. If you read Kafka, for instance, he's very much like that. Everything is punching, there's not a lot of nuance. I think that that relates a little bit to what you were saying, because popular music is a bit like that.
Pitchfork: But do you still feel a part of that?
SW: Not much most of the time, because people keep reminding me I'm about a million miles away from it. Every time I bring an album it's like I'm bringing in the plague, once again. I don't actually know what category it all falls into, but I've stopped worrying about it.
http://pitchfork.com/features/interviews/9003-scott-walker/

Both Rukeyser and Walker play with form - referencing traditional forms but playing with them and at the same time extending them out as far as possible. Scott's Bish Bosch album is part of a trilogy of albums (including Tilt and The Drift) and which spans over 17 years.

You can hear the contrast when you keep in mind Walkers pop origins - as Rukeyser I'm sure would agree, we are a long evolving, fluid and ever-changing work and she wanted this to be discovered I think both within a single work, a collection of works (book) and over the whole span of her life in all areas of writing/activism/teaching and parenting.


"Rukeyser saw in Gibb's Phase Rule an analogy for poetry, for she emphasised that poetry also depends on the relationships - the delicate equilibrium - between its parts; equally, she could envison the parts as changing phase". (pg 28 - essay by Meg Schoerke - Forever Broken and Made": Muriel Rukeyser's Theory of Form - from the book How Shall We Tell Each Other of the Poet - The Life and Writing of Muriel Rukeyser - edited by Anne Herzog and Janet Kaufman).

Walker too, would look for relationships between parts. His writing is completely based around the lyric poetry, and from there chooses the sounds which will relate with the word characters - so it is useful for me to think about this way of working given that the poems and words of Muriel are my starting point.


Pitchfork: Then there's all the other material-- this exotic and unusual instrumentation-- which I think of as a theatrical response to the lyrics.


SW: I think "theater" is a very good word for it, because the lyrics call for that. The way we approach musicians calls for that as well, because we use the same guys, more or less. They're very good at receiving description and then being able to do it. They're great actor players in that sense. I think of the string section that way too. When we're in there, I always say, "Look, you're a character and you have to be individual." So even the strings have that kind of role, they're just not anonymous things.


Pitchfork: I thought the strings in The Drift were like giant swarms of bees or Lancaster bombers coming over the coast. I never really thought of them as people with violins.


SW: The thing I'm always saying is that these aren't arrangements. They're just things, once again, relating to the lyric. What's the noise that relates to that line, or that word? What is the relation? That's what I spent a lot of time on.
http://pitchfork.com/features/interviews/9003-scott-walker/ 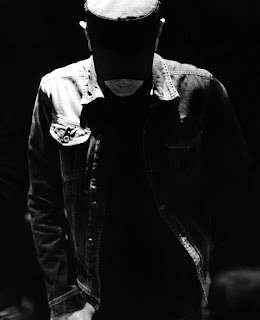 of Walker...
Pitchfork: Well, in a dark world there's no darkness.


SW: Or no silence in a silent world.


Pitchfork: I wondered if these insults were a reflection of all of the insults that have been directed at you over the years.


SW: [laughs] Well, it's been pretty rough at times, but not quite that bad. [On the song "SDSS1416+13B (Zercon, a Flagpole Sitter)"], it was just an idea, because he is a comedian. It's just the idea that he is being heckled by silence. He's being pestered and made to feel guilty. Silence of course is where everything originates from.
http://pitchfork.com/features/interviews/9003-scott-walker/

What he does believe is that harmony is heightened when you have to work for it. Beauty is best appreciated buried in the grotesque. And yes, he says, there is a pessimism to his work, but the chinks of life offer hope. "That's why I'm so puzzled when people say it's all dark, dark, dark, whereas I think there's a lot of beauty in it. Obvious beauty." And in the end, he says, that's what his music is about – the search for meaning and purpose in the wreckage. "I'm not a religious man, but it's a longing." For what? "For who knows. For existence itself. True existence. It's a longing for a calling. It's just a feeling that it might be there." Can we all find this purpose? "Oh yes, I believe so. We just need to find enough silence and stillness to experience it."
http://www.guardian.co.uk/music/2012/nov/23/scott-walker-interview

of Rukeyser...
"She was a person who put her body and her writing alike on the line when, for example, as president of PEN American Centre, she stood vigil outside the prison cell of South Korean poet Kim Chi Ha, and when she travelled to Hanoi in 1972 to protest the American war against Vietnam". (pg xv - introduction - from the book How Shall We Tell Each Other of the Poet - The Life and Writing of Muriel Rukeyser - edited by Anne Herzog and Janet Kaufman).

"She wrote of accepting her sexuality and the parts of ourselves we ordinarily despise or flush away". (pg 9 - essay by Jane Cooper - And Everything a Witness of the Buried Life: Muriel Rukeyser's Theory of Form - from the book How Shall We Tell Each Other of the Poet - The Life and Writing of Muriel Rukeyser - edited by Anne Herzog and Janet Kaufman)

of Walker...
"No more / dragging this wormy anus / 'round on shag piles from / Persia to Thrace / I've severed / my reeking gonads / fed them to your / shrunken face" (lyric from the song
SDSS14+13B (Zercon, A Flagpole Sitter) from the album Bish Bosch)

"Like its immediate predecessors, Bish Bosch retains a focus on feeling, even if the sensations it sketches aren't processed enough to resemble anything on the conventional palette of emotions....
...Sonically, some of the major traits of The Drift reappear – monstrous, clunking lopes interspersed with patches of giddying, squealing glissandi and murderous percussion – but are executed with even more dreadful panache this time around. There are abbatoirial electronics, touches of discomforting gated reverb from the Martin Hannett catalogue, and interjections of balefully clinical guitar, and that's before the bravura dabs of audio absurdism: farts, tuneless Brechtian choruses, and, on the concluding 'The Day the "Conducator" Died' (an 'Xmas Song' commemorating the execution of Nicolae Ceaușescu), the opening bars of 'Jingle Bells'".
http://thequietus.com/articles/10919-scott-walker-bish-bosch-review-2

here is some good hints of some of the above from Scott Walker himself...

Posted by Christine White at 6:31 PM